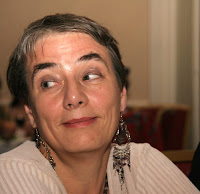 PAULINE DUNGATE answers the questions this time around about her story in The Alchemy Press Book of Ancient Wonders:

I spent all of my working life as a teacher but ended up as the resident teacher at Birmingham Nature Centre with a classroom full of exotic animals. I spend a lot of time reading, writing and reviewing when I am not in the garden. I take my camera on exotic holidays looking for wildlife. Last year it was Ecuador.

What inspired you to write “One Man's Folly”?

Every year there is a Middle Earth Weekend at Sarehole Mill in Hall Green, Birmingham. Because of the Tolkien connection, the local paper often runs articles about his influences around this time. On the photo of Perrot’s Tower, an octagonal building, I noticed that the corner stones of the topmost floor looked very different from the rest of the brick built building. That led to the question of what they were made of. What if it was a stone circle in the sky. The story grew from there.

It would probably have to be Hadrian’s Wall – either that or British Camp, the hill fort on the Malvern Hills.

The mystery. We know so little about them so there is much that can be imagined and no-one can tell us we are wrong.

I am working on a near future thriller set in Birmingham plus a number of stories. I write reviews and poetry as Pauline Morgan and there are plenty of my reviews around. The writers’ group I belong to has recently put out a pamphlet called Grapeshot which has three of my poems in it.


[Pauline E Dungate’s stories have appeared in anthologies such as Skin of the Soul, Narrow Houses, Swords Against the Millennium, Beneath the Ground, Merlin, Victorious Villains and Under the Rose. She has won prizes for poetry and has been a judge for the Arthur C Clarke Award. She reviews for SFCrowsnest and runs workshops covering all areas of creative writing. She lives in Birmingham with husband and fellow writer Chris Morgan.]