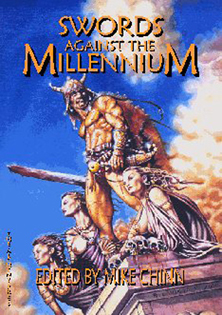 Swords Against the Millennium, edited by Mike Chinn, was co-published by the Alchemy Press and Saladorth Productions in 2000. The anthology demonstrates that heroic fantasy fits the short story format as well as novel length -- Mike Chinn and I were thinking of Robert E Howard, Jack Vance, Fritz Leiber, Edgar Rice Burroughs, Michael Moorcock... writers and stories of that ilk. To this end, Mike collected together eleven stories:

"An Embarrassment of Champions" by Chris Morgan

"The Stages of the God" by Ramsey Campbell *

"The Seventh Sigil" by Cherith Baldry

"The Taking" by Stan Nicholls

"Act of Sacrifice" by Paul Lewis

"To Catch a Thief" by Lisanne Norman

"Nyalis and the Cloud Raiders" by Anne Gay

"The Hunger of the Leaves" by Joel Lane

The cover painting was by Bob Covington, with interior artwork by David Bezzina, Alan Hunter and Jim Pitts.

The Joel Lane story was selected for the year's best anthologies for horror (edited by Stephen Jones) and fantasy (edited by David G Hartwell).

The limited edition is signed by all the writers, artists and the editor -- a fabulous book.

New copies cost just £6 (paperback) and £17 (hard cover) including UK postage. Email alchemypress@gmail.com for details. Or visit Oldhaven Book's Abe Store (just put in the title and away you go or click here to go directly to the title). Also available via Amazon UK.