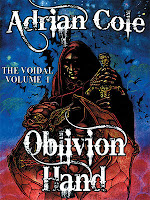 I'm a Devonian with Irish blood (County Cork) I live in Solomon Kane country and I'm a retired Business Manager now writing full time. I have a lovely wife, Judy, and two grown children, Sam and Katia; and the other woman in my life is Bella, my feisty calico cat.

I write what I suppose could generally be termed imaginative fiction, if such a term could adequately cover SF, fantasy, horror, pulp, with a few crossbred bits. I have had over 20 novels published, and many short stories, since the mid-seventies. I enjoy writing old fashioned pulp stories but equally enjoy writing modern SF.

What inspired you to write “The Sound of Distant Gunfire”?

One of the ways I try to keep fit is by cycling and in North Devon we are blessed with some marvellous trackways, including an old railway line converted to a cycle path for nearly 20 miles. I've been up and down it numerous times and the countryside and unique atmosphere gave me the idea for the story, although I don't actually find the cycle path spooky – it appeals to the elemental in me. (Or perhaps that should be, the mental in me).

Machu Picchu, up in the Andes. I'd want to be disguised as a native, though, otherwise I daresay I'd be pegged out and sacrificed to the sun, or worse. I've never been there, but one day...

Like many people, I suppose, I relate to them in some kind of atavistic way. I am an outdoor person (but also, by contrast, bookish and movie-ish) and love the elements – I lived on the edge of Dartmoor as a kid and as a youngster I grew up around the Cornish landscape (mines and beaches); and I now spend a big chunk of the year in the sea (I go home for tea, of course). Much as I appreciate modern technology, I still feel moved by the ancient past. I think it is because people were closer to the earth and the elements in those days.

My next novel is due out in 2014 and is a science fiction book, The Shadow Academy. It is set in an alternative Britain, the action moving between Dumnonia (Devon) and Londonborough. It's about a corrupt Authority and how it abuses power, a common theme in all my stuff!

There are some short stories due as well, “Nightmare on Mad Gull Island”, a booklet from Spectre Press, and “You Don't Want to Know”, which will be in Stephen Jones' third Innsmouth collection from Fedogan and Bremer, Weirder Shadows Over Innsmouth – both of these are Nick Nightmare stories and there are more of his stories in the works. He's got a strong grip on my PC at the moment. And there are other various projects in hand, large and small. Watch this space!

[Adrian Cole is the author of 25 novels, beginning with The Dream Lords in the 1970s, through The Omaran Saga and the Star Requiem to the Voidal Saga in 2011. He is also the author of numerous fantasy and horror short stories, having been published in Year’s Best Fantasy and Year’s Best Fantasy and Horror. Forthcoming from Edge Books is the novel The Shadow Academy; he has a short story in The Worlds of Cthulhu anthology due soon from Fedogan and Bremer; and he also has a story in The Alchemy Press Book of Pulp Heroes (sister volume to The Alchemy Press Book of Ancient Wonders).]