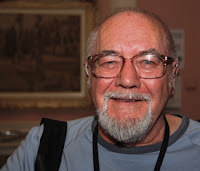 Today under the spotlight is BRYN FORTEY, answering questions set by the editors of The Alchemy Press Book of Ancient Wonders.

Writing-wise: it used to be short stories, then I wrote a lot of poetry, now I'm back to short stories. Sort of horror, SF, weird, oddball. I like crossovers and work that's difficult to categorize.

What inspired you to write “Ithica or Bust”?

David A Sutton told me about the Ancient Wonder anthology only weeks before the deadline. Being so long out of the loop I had no real idea of what was required but wanted to have a go, so updated a bit of Greek mythology into science fiction space opera, throwing in as many references as I could squeeze onto the page. It was very untypical of my more usual output but I had great fun putting it together.

I would get the TARDIS to drop me off at Cheltenham Race Course one day next week so I could jot down all the winners and come back to make a fortune from the bookies.

My problem here is that at my age I remember most ancient sites and landscapes when they were new.

Two stories in Shadow Publishing's reprint anthology Horror! Under the Tombstone, and two stories accepted by the American audio magazine Tales to Terrify, but I have not been told yet when they are due to be used.

[Bryn Fortey appeared in various anthologies during the 1970s, including: New Writings in Horror & the Supernatural and New Writings in SF. He was also published in various Fontana anthologies edited by Mary Danby. Bryn’s beat-styled poetry magazine Outlaw was Best UK Small Press Magazine of 2004 in the Purple Patch Awards. In the same year he won the Undercurrent Aber Valley Short Story Competition with “The Dying Game”. In 2009 his “A Taxi Driver on Mars” was first in the Data Dump Awards for SF poetry in the UK. Bryn hales from South Wales.]