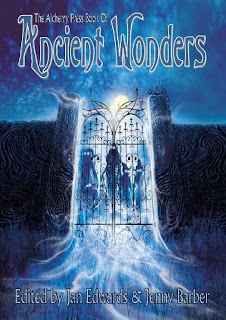 Being an old alchemist myself who took some time to get over the phlogiston theory, I was intrigued to see what was going on at The Alchemy Press. If you have not encountered them before, I would check out the website. This isn’t a weird and wonderful collection of 1960s hippies with crystals, wind chimes and astrology charts. Nothing like that here! Rather, it’s a site where you’ll find lots of interesting collections of stories and articles which have as a basis our past, our culture and the more mysterious aspects of our lives. I was actually quite impressed!

This particular collection contains 14 stories which have as their basis our history, sometimes with archaeological connections and stone circles with Celtic beginnings. You’ll be travelling back to ancient Rome, New York and even an Ithaca in space. However, the main link between all the stories is the quality of the writing which is very good. In selecting the works, the editors must have looked to readability as a major facet. They are all certainly very readable.

To give an example, “If Street” by James Brogden is all about a couple of childhood friends living near the site of a Roman settlement in Britain. As boys who investigated everything, they were intrigued by an old Roman road. One of the characters disappeared, to come back many years later. He had been living in the past as a Roman soldier fighting against invaders.

Bryn Forley’s “Ithaca Or Bust” is a parody of the legend of Troy, only the characters are vastly different. Taking place in a stellar empire, the beings have two heads, four arms and legs and are about five metres tall. Much of the conversation is between the two heads, one logical and thoughtful with the other forthright and adventurous. It makes for interesting reading.

It would be difficult to pick out a favourite story from out of the 14 available due to the fact that they are distinctly different despite having a common theme as their basis. Alchemy Press seem to have a large number of anthologies and according to their website, they are actively looking for new writers. This may represent a good opportunity for aspiring and established writers. I’m not sure what terms and conditions apply, so it would be best to make enquiries first. They do, however, have a comprehensive list of writing requirements.

This volume was produced in hardcopy a few months ago and now it’s available in Kindle and other formats. Being available from Amazon, it should probably sell reasonably well. It’s a sort of book you could carry about and dip into at any time and if you like this type of fiction, it represents a good purchase and one to recommend.

Posted by Alchemy Press/ Peter Coleborn at 11:37 AM