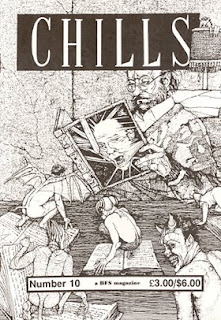 The final Chills, issue 10, edited by Peter Coleborn and Simon MacCulloch, was published by the BFS in 1996 (£3.00/$6.00). The cover illustration depicted a bearded gent reading a tome of some dubious ancient lore. Some people assumed it was a picture of your equally-bearded editor; I assure you it’s not – besides, gent’s nose is too large.

Once again, sadly, we had no artwork illustrating specific stories. In fact, artwork is only represented by the fabulous cover (by Russell Morgan) and one spot piece by Martin McKenna. The contents were:

So why did Chills end with its tenth issue? For starters, the ten issues covered a decade, more-or-less, and I felt that it was time to give the magazine a rest, at least for a while; and I wanted to pursue some other activities, including joining the editorial team on the BFS’s elder journal, Dark Horizons. Mike Chinn and I co-edited and co-produced DH with Phil Williams (and with Joel Lane in charge of poetry).

Very quickly BFS and other UK small presses were upping the ante as far as production values are concerned – all down to access to home computers and DTP programs. In comparison, Chills looked a little primitive. But the magazine, along with others in that era, was part of the evolutionary process. Whatever, I look back on it with fond memories.

Glancing through Chills 10, I note that BFS membership was still a mere £15.00 a year. FantasyCon XX was scheduled for 4-6 October 1996, at the International Hotel in London. The guests of honour were Christopher Fowler and Tom Holt, with Kim Newman acting as the master of ceremonies. FCXX was the trial run for the following year’s World Fantasy Convention. The 1997 WFC took place in the same Dockland’s hotel, over the weekend 30 October-2 November. This was the second time the event was held in London.
Posted by Alchemy Press/ Peter Coleborn at 12:13 PM