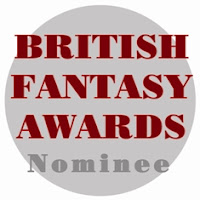 Some good news for Peter Atkins and The Alchemy Press.

Rumours of the Marvellous by Peter Atkins has been short-listed for the 2012 British Fantasy Awards in the Best Collection category. It is up against some stiff competition:

Everyone's Just So So Special by Robert Shearman and

A Glass of Shadow by Liz Williams.

The winner will be decided by a jury and announced at FantasyCon 2012, once again held in sunny Brighton in September.